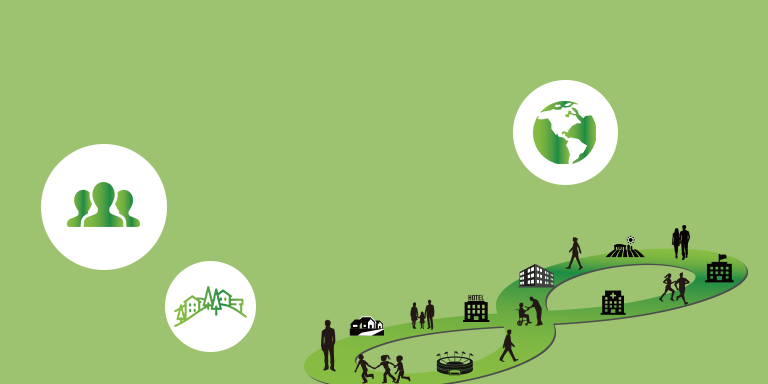 The Rebirth of a Tokyo Hotel

Building on a Legacy to Strengthen a Community and its Future

Two years ago, the Shinjuku New City Hotel looked destined for the wrecking crews constantly reshaping Tokyoʼs restless skyline. Sitting next to the sprawling greenery of Shinjuku Central Park, on the edge of Shinjukuʼs skyscraper district, the hotel had become a musty, worn-out relic used by high school sports teams and tour groups.

Fast forward to today, and the hotel is still there, but with a new name, a new vibe, and a new lease on life.

On a recent afternoon, the bustling lobby looked like an extension of the popular park outside, filled with people heading out to sightsee, arriving for brunch, or sitting along the large, natural wood tables to talk over coffee or tap on laptops and smartphones.

As a DJ spun vinyl jazz records, the voices rising above the music were speaking in English, French, and Mandarin as well as Japanese.

‟This has become a popular hangout for locals who knew the hotel when they were growing up, and come to marvel at how it has changed,” said Tatsuya Ikeda, whose mother built the hotel in 1979 to replace an earlier hotel built by his grandfather. ‟This neighborhood is changing fast. The hotel is changing along with it.”

Ikeda carries on the family tradition by managing the hotel, reopened in August 2018 as THE KNOT TOKYO Shinjuku. The relaunch followed a 4 billion yen renovation by the new owner, Ichigo, that transformed THE KNOT into something new: one of Tokyoʼs first true boutique hotels.

The boutique concept has been slow to come to Japan. While boutique hotels account for 20% of all hotel rooms in New York City, and 10% of those in London, they make up just 0.7% of the rooms available in Tokyo.

More precisely, THE KNOT is what is known as a lifestyle hotel, a type of boutique hotel that focuses on offering guests not just chic design but a deeper connection with the surrounding neighborhoods.

‟In Japan, hotels feel cut off from the local community,” said Yasuhide Hosono of Ichigo, who runs the lifestyle hotel business. ‟I stayed at lifestyle hotels overseas, where local residents come because they actually feel a connection, and I knew this idea would work in Japan, too.”

Shinjuku is Ichigoʼs second THE KNOT-brand lifestyle hotel. The first is THE KNOT YOKOHAMA, a renovated hotel in the eponymous port city that reopened in 2017. Two more are currently being built in Sapporo and Hiroshima.

Hosono said THE KNOTʼs name was chosen in order to emphasize its goal of serving as a tie between guests and locals, and also past and present. During the extensive renovation, designs elements from the original hotel were kept, including 1970s-era gold star-burst chandeliers installed by Ikedaʼs mother.

In the lobby, walls were removed to create a naturally lit two-story space that merges the restaurants, cafe, and bakery with the check-in area and a space for exhibitions by photographers.

The main restaurant, the MORETHAN GRILL, has taken off not only among guests but also as a gathering place for residents of Nishi Shinjuku, the surrounding residential neighborhood that predates the skyscrapers that started sprouting in the 1960s.

The hotel itself bears testimony to the neighborhoodʼs recent history. Ikedaʼs grandfather, a carpenter, bought the land when it was still a field of cinders from World War II bombing, and erected a wooden hot springs hotel. Ikedaʼs mother replaced that with a modern concrete hotel, which prospered during the opulence of Japanʼs postwar economic boom.

Ikeda, who grew up in the hotel, remembers its 1980s heyday, when movie actors frequented the steak house on the top floor (now gone), and camera crews used it as a location for episodes of ‟Ultraman,” the iconic science fiction television series. Like the rest of Japan, the hotel fell on hard times after the 1990s.

Today, some 80% of THE KNOTʼs guests are from overseas, with many from Western countries, which is unusual for a Tokyo hotel. But for Ikeda, the most demanding guest is his mother, now 79 years old, who comes to eat and has even spent the night.

‟She really likes how vibrant the hotel has become,” Ikeda said. ‟And she is so happy that we kept her chandeliers!”