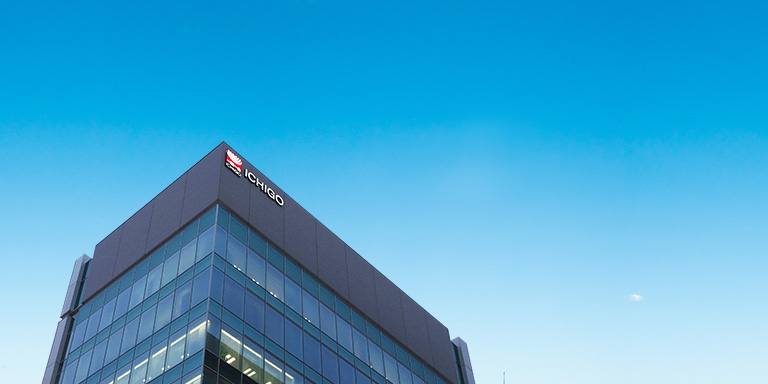 “Ichigo” comes from an ancient Japanese proverb, Ichigo Ichie, literally meaning “One lifetime, one encounter.” The phrase was first used by a 16th century tea ceremony master, Sen no Rikyu, who called on his disciples to give total focus and sincerity to each act of the tea ceremony for every guest, because that particular moment will only exist once and must be fully lived and realized. We embrace this philosophy of building and maintaining strong long-term relationships to support the success and growth of our clients, shareholders, and all stakeholders.

Our logo is rooted in the ancient Japanese traditions of tea ceremony and wa (harmony). The circular design at the top of our logo represents the chasen (bamboo whisk) used to gently stir tea during the tea ceremony, and the color of the logo is that of Japanese lacquer.

Ichigo was established in 2000 and listed on NASDAQ Japan (now JASDAQ) in 2002, engaging in corporate investments and real estate asset management. After overcoming the 2008 global financial crisis, Ichigo refocused on its core business of Japanese real estate asset management. The current “Ichigo” name was established in 2010, marking a new era for the company. Ichigo developed its core value-add function, reentered the J-REIT market, and expanded the clean energy business. In 2015, Ichigo was listed on the Tokyo Stock Exchange (TSE) First Section and moved to the TSE Prime Market on April 4, 2022 as part of the TSE's market restructuring. Since then, Ichigo has established consulting services for real estate owners and other businesses leveraging its value-add capabilities, and transformed into a sustainable infrastructure company. Since 2016, Ichigo has also achieved inclusion in the JPX-Nikkei 400 Index, which ranks the highest market capitalization and highest value-traded Japanese companies.

Kenji Iwasaki joined Ichigo in May 2001 and led Ichigo in its second stage of growth. He became Ichigo's President in October 2008 at the age of 38 during the turmoil of the global financial crisis, and executed a swift business restructuring with Scott Callon, who became Chairman in the same month.

After being diagnosed with ALS (amyotrophic lateral sclerosis) in 2015, he handed over his responsibilities as President to Hasegawa and assumed the role of Co-Chairman with Callon. In November 2015 Ichigo achieved its goal of moving from JASDAQ to the Tokyo Stock Exchange’s First Section. Iwasaki dedicated his life to Ichigo, working at Ichigo’s office until his final days, before passing away in July 2020 at the age of 52. The core values that Iwasaki established will always remain at the heart of Ichigo.

Ichigo’s mission is to make the world more sustainable. As a member of Japanese society, Ichigo is dedicated to fulfilling its mission in the spirit of Ichigo Ichie, meaning “One lifetime, one encounter.”

Ichigo as a Sustainable Infrastructure Company

Ichigo is a sustainable infrastructure company supporting people’s lives.
Ichigo is dedicated to contributing to a sustainable society via its businesses centered on real estate and clean energy.

Ichigo believes real estate serves as critical infrastructure to enhance and enrich the lives of individuals and communities. Ichigo has moved beyond the traditional view of real estate as simply physical buildings and land to one in which Ichigo more broadly provides key infrastructure that is fundamental to people’s lives. Ichigo is now working to merge the physical infrastructure of daily life – offices, homes, hotels – with the networks and datadriven possibilities of the digital world in order to offer more enriching experiences to its clients, tenants, and other stakeholders.

The revolution in IT and networks that has transformed industries globally has also reached real estate, creating opportunities for radical improvements in serving tenant needs. To invest in the potentially enormous growth opportunities from this technological change and drive significantly higher long-term growth for its shareholders, Ichigo developed its long-term vision, Ichigo 2030. In Ichigo 2030, Ichigo will build upon its value-add capabilities to expand beyond real estate and grow as a sustainable infrastructure company. Over the Ichigo 2030 period until FY30/2, Ichigo will focus on high capital productivity, high cash flow generation, high earnings stability, and driving shareholder value.